This wiki is being migrated to http://www.github.com/z88dk/z88dk/wiki 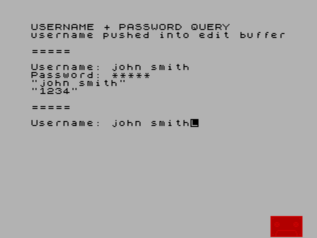 This program demonstrates some of the features of the new C library's terminals. It is a username / password query in a loop with the last entered username pushed into the input terminal's edit buffer to prime the user's input. When the password is entered, the input terminal is placed in password mode which causes all echoed chars to be printed as asterisks.

Succeeding lines push the last username text into the input terminal's edit buffer by copying the username into its buffer and changing the local size member appropriately. The following “IOCTL_ITERM_SET_EDITBUF” ioctl copies the local edit_buffer into the input terminal and an internal flag is set to indicate text was pushed. This is a byte-wise shallow copy that involves the pointer to the edit buffer (this will be the same as the input buffer's pointer so no changes there), the size and the capacity of the buffer. When manually changing the b_array_t's members like this, you do have to be careful to maintain the data type's invariants, for example don't write a string into the buffer that will be longer than the buffer can hold. There is no danger of this happening in this program because the username is entered from the terminal so it can never be longer than the terminal's internal buffer.

The following scanf will cause the input terminal to first echo the pushed text and then resume line editing. Effectively the input buffer is primed with the text pushed.

Normally it's better practice to use getline() to grab an entire line of text and then sscanf that as dealing with the stream directly is not something most C programmers are used to. In particular scanf does not remove text from the stream that is rejected by a scanf converter and this has consequences that most programmers find unexpected.